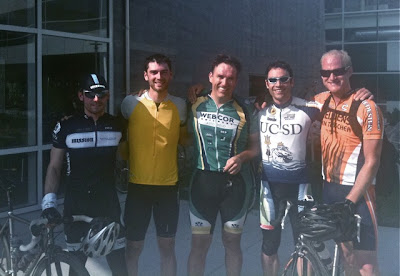 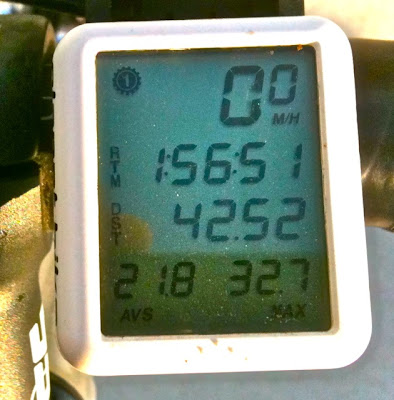 yes the pickin's did look slim at Ritual about 6:55 as M. Gaiman, Eric, Hobinator, and yours truly sat slurping our macchiatos in grim silence. but then, as if by magic carpet, the mighty septuagenerian One-Kit Murph appeared as a green, threadbare apparition, and announced his readiness to attack the much-feared Bayway Record. at 7:08, the TTT commenced.

it was then noted that all bikes present were raw titanium, aluminum, or carbon, and paint was decreed bourgeois.

so there were 5, so one was in danger of eventual dropitude, but the miracles did not cease, and we were immediately joined on valencia by the powerful Mark and his associate Baris, who rode a blue(!) Fuji. now up to 3 could be dropped in the name of Speed.

it was then agreed that discipline and short, acceleration-free pulls in the 24-26mph range would be observed. ahh, it was a thing of beauty. 7 riders in egoless paceline rotation, all pulls under 2 minutes almost without exception. only once did Mark's excessive power and iron legs get the better of him, and he had to be reminded that his teammates could not sustain 28mph for long.

arriving at Sun, Adam the Pole-Slayer was encountered, and his head appeared unharmed. just afterward, Steve and Dan were subsumed, and Steve on his sexy, gleaming white BMC cyclocross rig joined the team for a couple-mile chat.

the group of 7 nearly arrived intact, but a looming black Escalade on University shaved the hapless Eric and Baris off the back like whiskers, while simultaneously Hobe's pedal spring gave up the ghost and he was forced to limp home unclipped on one side.

Mark then reminded us this was no laughing matter, and drilled it on Bayshore, maintaining a 26+ mph average for the entire length, with brief assistance by the team. It was then that the average crept over the golden speed of 21.7mph, and all that remained was a strong finish to Rengstorff.

and despite having only one functioning pedal from EPA, Hobe still broke 2 hours, with a 1:59 something. nice.

Old Age and Treachery baby. When you are in over your head - suck wheel.

Then as soon as the struggles really begin, throw a wrench into Hobe's pedal, flick Baris and Altendorf at East Palo Alto, thus forcing the lead group to keep you around... bwhahaahaha.

Alas, we did get annoyingly get dropped pretty darn close to the finish line. I blame the absence of cytomax, <120psi>

Until next time... /shakes fist