Off topic: There are some things canadians say that give them away without their knowledge. Not the obvious things like "out" and "about". The following are dead giveaways that the speaker is canadian: Cagey canadians will effectively filter most other cover-blowing terms, but the above consistently escape their notice.
Posted by SF2G Crew at Friday, December 19, 2008 No comments:

that.sucks. But Gavin, you look like such a bad ass with all the mud on your face! I'm sure that picture, along with the epic ride report, made it almost worth it. ...almost -Heather
Posted by SF2G Crew at Friday, December 19, 2008 No comments: 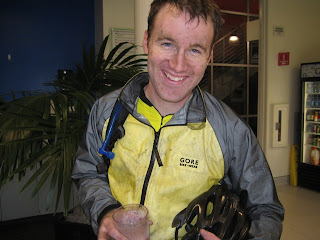 ride report: EPIC FAIL wow. Wow. that was a lot of flats. things started innocently enough as 6 rain-shmain riders converged upon ritual and motored into the saturated grey twilight, caressed all along by cheery, gentle drops of holiday dew. but soon enough, the Fates cast a blight upon us, it seems. first was the dumbass in the F-350 who turned left INTO gavin at the bayshore/silver rd. intersection, causing brakes to lock up and a collision of bret into my bike, thru no fault of his. i then wisely went after the guy and slapped his truck like the bitch it is, which at least got the punk to stop so we could berate him in a civilized manner. theo's technique was to slide out and sprawl himself on the asphalt, which i thought pretty effective. he did at least utter an expletive or two while carrying out his unusual plan. carrying on, nothing noteworthy transpired until the holly rd. overpass (skipping the BTN due to insane mudiness), when i noticed a swish-swish-swish sound coming in rhythmic waves from gavin's rear tire. flat #1. fixed and rolling in a couple minutes, but with gavin suffering bloody cuts to his fingers by the selfsame shard of glass, a real bugger. meantime lina and matt carried on in hopes of scoring mini-burritos. a few minutes later in the climate-best-by-government-test paradise known as redwood shores, I feel that uncomfortable "am i standing on a banana slug?" sensation myself, and it's hello gatorskin failure #2. as i looked down to examine the flatness, i nearly impaled an equally oblivious pedestrian with my face, and received a righteous scolding by another F-350 driven by a fake Santa. coal for me this year he seemed to imply. we told him what he could do with this grumpy self. in the course of fixing flat 2, i noticed a puncture to the RIM of my ksyrium ES helium 20th anniversary edition, great. "fixed" that with a tube patch. WTF? how did that happen? no idea. not much later, just past the charming Graniterock facility, I got the next flat to that same tire, surprisingly not caused by the compromised rim -- this time it's a random slice by the valve stem, weird. no shards in tire. this time we were out of spares and had to patch the previous tube, in the rain, sitting in a gutter. super. that done and air holding, we made it past the EPA bridge to the parking lot when gavin says "oh (brother)!" and yes, the fourth flat is ours. we are 2 miles from home at this point and attempt a "pump it up real fast and ride till it's flat again", which happened one meter into bayshore. really tired of changing flats, I suggested a "blast it with co2 and hope for the best" approach, which got us almost to san antonio. then we faced reality and patched flat #4 1 mile out, and rolled into G at -- get this -- 10:45. wow. ride time: 2:28. total time: 4 hours flat. -sc
On Fri, Dec 19, 2008 at 12:38 PM, T-Bone wrote:

It was cold, dark, and raining when I set out this morning -- since so many of you are Californian, I'd say it was "pouring", but being an Oregonian I just can't state that in good faith. Since Sean had cancelled, I was riding solo, but I brought a Napolean pocket full of Les Claypool to keep me company on the way.

The first few miles were great: rain, rain, and even lightning as I passed Paul st (or maybe it was another random Bayview garage explosion). My Helly Hansen ultralight hooded shell was 100% waterproof and the base layer and insulation had me warm and toasty and dry. The Chiba winter gloves and mickey mouse booties covered my extremeties and I was thoroughly enjoying myself.

Out towards the hotels, I started realizing that the water seeping down through my tights into my booties was actually a problem, and in addition, the booties are not actually waterproof (I'd assumed they're neoprene, but they're not). Around the airport, I realized the Chiba gloves were not waterproof either. This is also around when I developed "Rabies Knee", where the knit of my tights worked the water around the knee into strangely shaped foam deposits. Bizarre. Starting to get cold, and visibility is bad...

I took the deadly lagoon detour, a bad idea on a day when you're getting numb and can't see; I had one hand off the bars and one of the cracks of death launched me straight on to the pavement. Nothing catastrophic, just a little blood and some interesting new curves to my legs that appeared as time went on.

Cold, numb, and bruised I forged onwards. The rain relented and I even got some sun, though it was little comfort as my feet sat in puddles of December water. Things were fairly uneventful til EPA, where I apparently picked up some tiny shards glass in my front tire, since it sagged to flat on the marsh path just after. Undeterred, I located the glass, removed it, patched the pinhole, reflated, and rolled along.

At Embarcadero, I realized that there must have been more glass, because my front tire was sagging again. I picked up speed, hoping to make it to Google before it went totally flat. No go. Half way down the stretch to san antonio, I was riding on the rim, but lacking any more CO2, I kept going and slowly rode the last 3 miles on a flat tire.

To add insult to injury, as I was pulling up Rengstorff, a guy passed me on a G-bike.