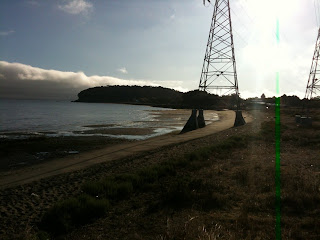 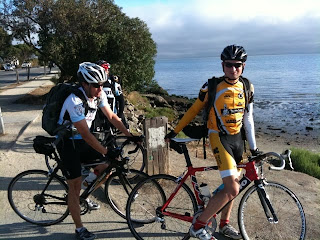 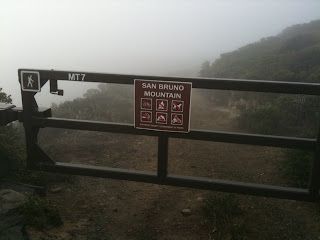 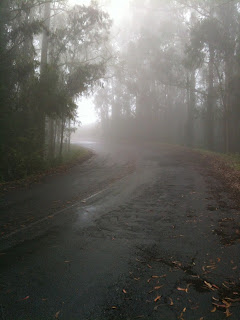 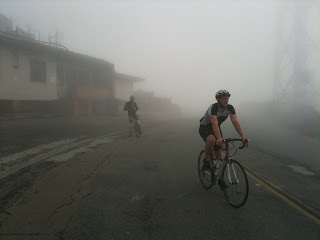 ride report:
arriving as I did at Ritual in the predawn blackness @ 06:20 to find it utterly empty, I at once feared I'd gone to the wrong coffee place.  so I ordered an elaborate Clover-made Kenya AA and took my sweet time going over the fine points of their sustainable farming practices and roasting.  mmmm.
anyway, while that was brewing, a swarming hive of riders appeared all at once in a mighty torrent, and soon 21 spandexed gladiators jammed the place to the gills.  one nameless rider even had the temerity to order a drink at 06:35, take it to go, and show everyone how to drink it while riding, perform a spectacular endo, fly over the bars, and end up standing/grinning, coffee unspilled.  do not try that at home!
that drama subsided, we made our way down Mission and up the usual Guadalupe Canyon road toward the MSB summit.  like clockwork, the powerful M. Gaiman launched his attack, and held off his pursuers to the zenith.  frustrated and vexed, xton, mark, and ariel launched a rival attack up Radio Rd. without waiting for any argument on the subject.
having never ridden RR, I was personally delighted by the misty, fog-shrouded forest, which rained giant drops upon us, and found the pavement and grade very satisfactory.
the view was obscured by swirling mists and fogs, but it was still awesome and much recommended.
the next variation, the burlingame lagoon, was pleasant and sunny, and that would have been that if Lorenzo had not attempted a difficult power-slide at the bridge entrance, which resulted in wreckage of man & machine.  rear wheel destroyed by spoke pulling thru the rim bed, he carried on to a local shuttle stop and was checked off as a casualty of the road.
next was coyote point, which was universally hailed as lovely and philosophical.  no wrecks.
2 variations were skipped in the interest of time: the san mateo hill detour of kinetic sculptures, and the Lider Lollipop.  another day.
total miles: 50 even.  time: 3 hrs. riding.
side note: for the 3rd day in a row, another challenged raged -- could Space actually bake *another* breakfast treat, even more delicious than the last?  the vegas oddsmakers had it at 7:1, considering the banana-espresso-chocolate muffins of tuesday, but incredibly this feat was accomplished, and today's treats were ravaged well before ride's end.  again, all who failed to attend should throw themselves from a bridge and end it all, since your lives are unworth living.
-sc
Posted by SF2G Crew at Wednesday, September 16, 2009

Less than 5 blocks into today's 50 mile ride to work, I was cruising along one-handed (with my right hand) and tried to reach across and shift my gears with my left hand while holding a cup of coffee. This was a bad idea: I veered crazily towards the curb to my right, destined to crash. I tried to recover, hit the curb at an acute angle, bounced back towards the street, and finally started to go down. I somehow lept from my bike as it skidded sideways, landing on both feet and skidded to a stop as I raised my hands above my head and let out an elated "Whoop!" And there was still some coffee left in my cup (the rest was all over me). The bike was fine and I was forced to continue my quest to ride to work all five days this week.