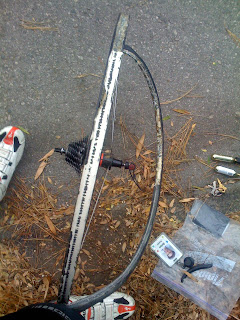 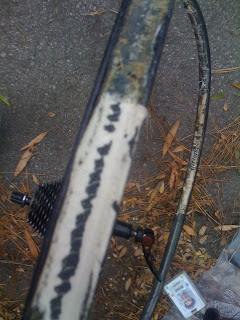 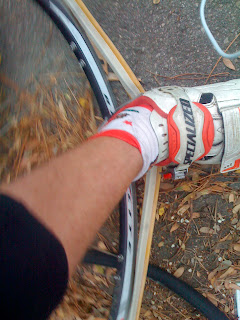 My Skyline was punctuated by a puncture on 35 by the Olympic Golf Course. Unfortunately, my cry "flat" fell on deaf ears ahead of, thus stranding me sans pump. I remembered my spare tubular tire, but in switching bikes, I forgot to take my little repair bag.


Minutes later another cyclist stopped with C02 while I struggle to remove my tubular which was so tightly glued to the rim it seemed welded on. The good samaritan didn't want to wait, but did graciously leave his C02 behind allowing me to inflate my spare after spending a half an hour wrestling with the tubie. I made it to Daly City where the GF picked me up, whisked me home and then lent me her car to allow me to drive in.

The photos show the casing still attached to the rim as well as the new "step technique" developed on the fly allowing me to put on the spare tubie in record time.