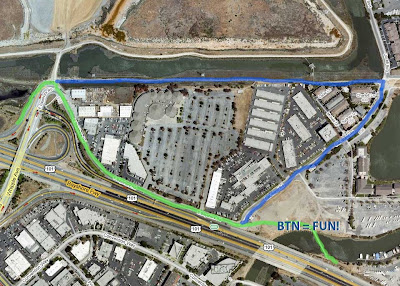 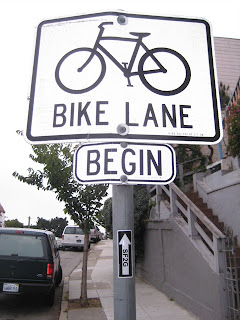 stickering up the route in SF 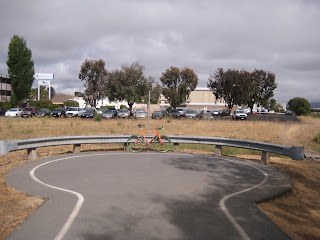 start of the bay trail south of the airport 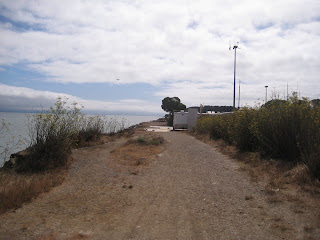 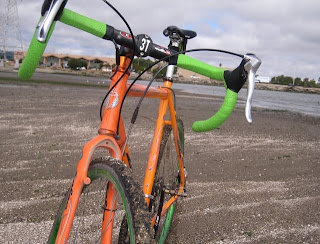 why not ride on the beach? 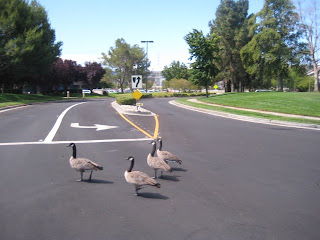 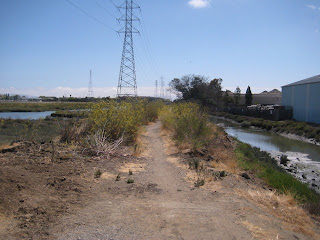 this is the "blue line" in the image

explored some pretty cool dirt/paved trails along the ol' bayway today, and since I had the 'cross bike, there were some excursions into the squishy parts of the way. may be making a recommendation to the executive committee to make the south-of-airport start to the bay trail the default route, rather than the kind of lame S. Airport Rd., which is narrow and trafficky.

as for the "official" route immediately preceding the BTN (see previous email), it's loose & narrow dirt, pretty fun but not great.

also did extensive route-stickering until I ran out, which hopefully is noticeable for the first 15 miles of the ride.

see attached for some photo documentation.

> 2009/8/4 Scott Crosby >> plotting to do some route marking and exploring of dirt paths tomorrow >> in the vicinity of the BTN. see attached map. the green line is the >> usual route, the blue line is the "official" bay trail, according to >> redwood city politicos. oh, also going to go around the dirt hill at >> the san mateo rest stop, which for some reason I've never done. >> should be good times. > > We did this last week since Stoerr mentioned there were wind sculptures there. > >> i'll be getting the world's most delicious coffee at 7:15 @ philz >> (folsom/24th) and then moseying on down the bayway, stickering it up >> as i roll. >> >> >> -sc >> > -- > Thanks, > Jim > http://phython.blogspot.com