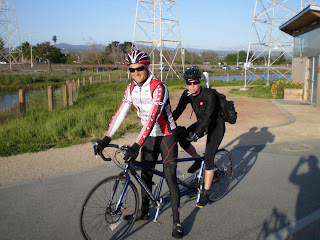 as the stoker, i feel it is my duty to write the ride report heavily affected by stokerness, so here it goes:

a fine group of ~18 hot cyclists joined at ritual in the somewhat wee hours of the morning, and the benefits of tandem cycling already started showing as scott shared his coffee with me, and in return got to eat half of my banana bread. we headed out and i was trackstanding gloriously every time we came to a stop. i felt like i had mad skillz although maybe i got a tiny bit of help from my captain's foot touching the ground.

going up cortland wasn't quite as painful as it usually is. win! an unexpected side effect was that the tandem was much more comfortable than my own bike so going down cortland or any other piece of crappy paving wasn't as painful as it usually is either. tunnel rd went by pretty fast, and the wind was certainly in our favor this morning. i was trying to see where we were going and make sure we weren't running into other people or anything, which of course was pretty useless as i could do nothing about it. it took a bit of getting used to but hey, if the stoker freaks out about not seeing where you're going, you're still not going to be able to do anything about it so you can't really mess up. so pretty soon i relaxed since scott probably only crashes when he's riding his own bike. as i'm one of them scandinavian commies all this sharing appeals to me, and we only had one bottle cage anyway, so we synchronized our water drinking as well as our cadence.

now what does one do on a tandem by the cyclocross section? while on the dirt i suggested walking up but scott said "nah" and up we went, i suggested we should at least walk down but he said "nah, these are mean brakes" and down we went (in a good way, not the falling over kind of way). it was surprisingly easy although of course all i had to do was to sit on my butt and pedal.

xton took the opportunity to do some wheelsucking behind the glorious tandem but after being taunted did a lead out for us and i think the max speed we eventually hit on the flats was 31 mph. sliiightly faster than i'd be able to do on my own.

people attacking was fun since we could always easily catch up and pass. win! we made it to breakfast at 9:10 or thereabouts, despite a late rollout and long break at the water stop. average speed of 19.9 mph.

as for scott, he's a great captain. thanks! he gets 5 stars.

now i'm gonna go to charlie's and tell everyone how awesome sf2g is and help scott recruit more women for the tandem. i bet the tandem is a great way of getting more women into sf2g.