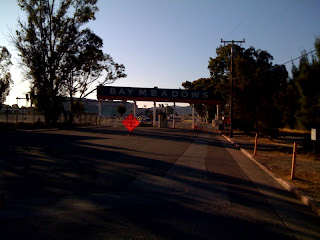 Despite bay meadows' closure, you can still ride your bike thru it.
Demolition is already underway.

while less grandiose than the hmbway, i'm super glad scott suggested this ride. the following hombres rolled out at a casual 6:40 - brett crosby, naveen, bk broiler, steve and the burr twins: bryan and scott. decent pace, rolling maybe 2:10? despite bay meadows being closed, the pedestrian/bike path through the parking lot was still open, though achtung! pay attention or you will be decapitated by the caltrain platform just before old county rd. for various reasons, brett gave the route the proverbial thumbs down. too many lights / stop signs. i say hogwash! nothing like basking in the warm glow of nostalgia -- old county rd breakaways, colma cemeteries, crazy fixie guy, a belly-strong and head-sure marius attack, more dooring opportunities per mile than any route, and a little bit of real-life grand theft auto: redwood city.

only one mechanical (flat, mine, sorry) and near-miss (me leading the pack into the path of a moving truck, sorry again.) i promise to be better next time.

looking forward to the next installment, a few weeks away!

i admit it was an excellent suggestion, and despite the incessant moanings of that woman kemler and brett's caesarian thumbs-down (route not executed despite that), i think all generally had a jovial good time.

one point of clarification: brian w. and I are now to be referred to as the "Burr Brothers", as indicated below. why? upon reaching no-name, it was decreed that a custom burrito must be ordered by all, forthwith. the sous-chef(?) took our bowls o' modifications (soyrizo/fake kielbasa/avocado/cheese, mmm) and wrote down on a Post-It note the following:

so after waiting a while and seeing no burritos being made, they finally yelled out "OMELETS FOR SCOTT AND BRIAN BURR!!!"

we decided complaining was petulant/discretion-the-better-part-of-valor and ate our delicious omelets, despite brett's orgiastic moanings over the flavor of his burrito...