Ride Report: East Bay Way - Scouting The Way Along The Other Side Of The Bay 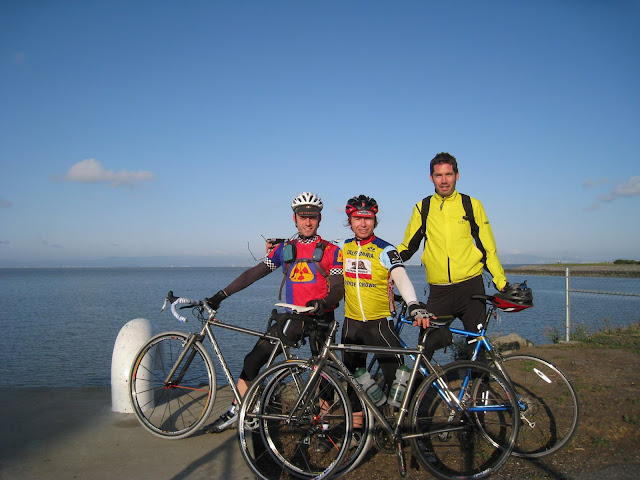 If you hate the Bridge to Nowhere, you can stop reading now. (If you have no idea what I'm talking about, keep reading.)

(OK, I think all the poseurs have left. Now to continue with the ride report...)

[Update: direct link to map of the route for kids who don't read so good.] 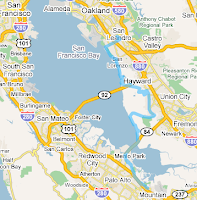 It got started by me being curious about riding riding around the Bay -- ever since I started riding in the East Bay hills and on the San Francisco peninsula. My curiosity was amped up when I started consulting for Cisco along 237 (along the south end of the bay) and started riding a loop that took in Sierra Road (connecting to East Bay routes) as well as riding to Cisco from Caltrain (connecting to peninsula routes). Later I started consulting for Oracle and while there I rode my bike along the Bay Trail all the way up to Oyster Point, just South of SFO, and I from that experience I figured you could keep going all the way back up to the city. Fast-forward to me starting at Google, where on my first day (before Noogler orientation), I went for a bike ride along the Bay Trails near work. I almost immediately started scouting the Bay Way using Google Maps and then scouting what I thought was a good route on my bike, riding a little further North along what would become the Bay Way each day before work. Once I found the Bridge To Nowhere, I knew it was gonna work: a route to work that didn't cross 101 more than once and stayed off-street and on low-traffic roads as much as possible. All my Bay Way scouting trips were solo and I did the final end-to-end pre-ride one weekend. I sanitized the route a bit for marketing reasons (it's spec sheet didn't compare well to the then-vogue Joe Gross route: 42 vs 37 miles! so many turns!), sent out an invite to try it, and a mini bike commute Renaissance was born. (Or at least that's my take on it. Scott and the rest of the founding SF2G crew's mailing list and website deserve a lot of credit, too.)

Meanwhile my curiosity about a route along the Bay continued. I knew you could get from SF to Google and then to Milpiltas (SE corner of the Bay) via mostly bay-fronting roads, but what about the eastern-side? One day I rode from San Leandro (where my favorite bike shop is, (Chris) Robinson Wheel Works) down around the bottom of the Bay and up to Redwood City; I ran out of daylight before I could make it all the way back to the city. It was fun but the problem was that the route I took down the East Bay was shit: all inland and on shitty roads.

Another year passes... on a weekend ride exploring all those little cul-de-sacs that stick out into the Bay on the Bay Way (yes, this is what I do for fun, and this is a whole other story, and a worthwhile ride, too), I rode out over Dumbarton bridge and noticed a levee that shot out to the North from where the bridge touches down in the East Bay. It looked like a very rideable dirt road. It also looked amazing: so narrow and surrounded by water for miles. The idea of riding on it stuck in my mind, where it sat for another year.

Another instigating event that occurred was that Bob Ryskamp, a fellow Googler and cyclist who had always lived nearby Google, moved to Berkeley and needed a way to get to work. We got to talking about scouting an East Bay Way. And when I say that, I don't mean "a route to route down from Berkeley to Google" but that plus the attributes of the (Peninsular) Bay Way: along the bay, low-traffic, off-street as much as possible. But our schedules never aligned, so nothing came of it. Another year passes.

"Get to the point, already!" - or - Brett learns to share the scouting with others

I haven't been riding much lately, and I've been bored with Bay Way. For whatever reason (see above), the old idea of an East Bay Way came to mind. I emailed my SF2G l33t crew plus Bob and Donal "The Amateur Adventurer" Mountain and set a date. I started scouting with Gmaps, intending to keep the route a secret until the day of. The timing was off, so nothing came of it. Second try, the next day: Donal and Eric "Flat Affect" Altendorf foolishly volunteered. I let them see my precious maps, Donal loaded my route segments onto his GPS, I reassured him that road bikes can ride on gravel, and Eric loaded the map tiles onto his G1 (something Donal's GPS lacks), while I tried to get him to put clinchers on his cross bike (successfully, miraculously).

We set out this morning, catching a 6:40-something train to San Leandro. Easy as pie, bikes allowed, $3.95, 32 minutes. We bore right out of the BART Station onto, appropriately, San Leandro Blvd (bike lanes), and then took a right at Marina Blvd (no bike lanes, easy interchange with 880). After an extremely loud encounter with an Amtrak train, in a total of three easy miles we were at the bay shore, and maybe a 1/4 mile after that had slipped past a gate onto a paved path headed South along the Bay. The vistas just seemed wider, the distance across the bay further (it turns out that they are - this is the widest part of the Bay). (At this point on Bay Way, you're fighting through San Francisco or in South City by the airport.) We were on a blissful path with along just a few hooded-plus-huge-sun-visored Asian ladies out for their Vitamin-D-free exercise. And then we had a little photo shoot to commemorate the easy part of the trip.

After a few miles of bay front and near-bay front paved path, the route turned to dirt. We knew this. But be forewarned: there is a lot of dirt path on this route. A lot. Like, totally, half or close to it, man. Most of it is smooth, but there was some loose gravel sections, too. (Now you see why I turned away all the Bridge to Nowhere haters.) But it is totally rideable with the right attitude: Donal had never ridden his road bike on dirt before and he was still pulling strong at the end.

The route from Marina Blvd. to 92 was vouched for by the aforementioned Chris Robinson, so we didn't expect nor did we get any drama. We did get a creatively decorated sewage treatment plant and some cool bridges. And did I mention dirt? Some of it was very fast, and very straight. I did my best Paris-Roubaix impressions at this point: going hard and kicking up a dust cloud (or maybe the boys were flattering me by telling me that). We arrived at 92 in no time, crossed over the highway on an excellent pedestrian-bike bridge, and the fun started: the route between 92 and 84 was the big unknown, El Grande Sur of the ride. I had plotted a path based on my ability to read the qualities of the levees on Gmaps, but I doubted we'd get by without any dead-ends or divergences. 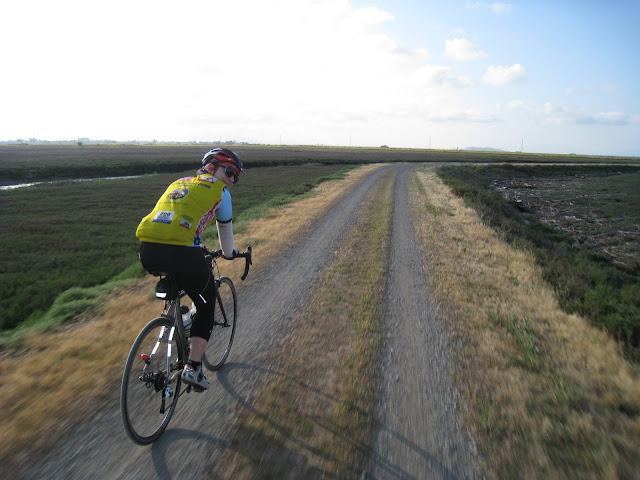 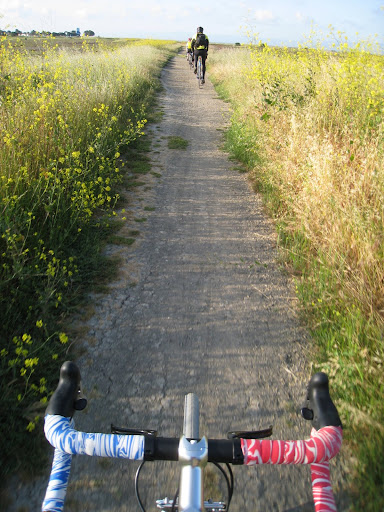 Sure enough, the dirt roads turned more gravelly and the way was less clear. And my intended route was foiled by some stupid Ecological Preserve. We were forced to divert into a subdivision with its own moat(!). We were off-route at this point and had to wing it. We got lost in the subdivision (it was a maze), tried to escape, failed, and finally made it out onto a surface street headed South. I was pretty bummed that we couldn't complete the 92 to 84 segment on trails. (It looks like this deficiency will be remedied shortly - sometime in the next 50 years.) We tried again in vain to get out by the Bay on trails, but realized we were using desperate tactics (crossing RR tracks and bridges and trespassing) and we remembered that the point of the exercise was to create a route everyone could ride, so we sucked it up and rode South on Hesperian/Union City Blvd, which doesn't always have a bike lane but the traffic was very chill with us taking a whole lane.

Here's where the awesomeness really started (I really suck at foreshadowing). Union City Blvd crosses Alameda Creek at the border of Fremont. On the far side of the creek, we left the road and jumped on on a ~10 mile segment of paved and smooth dirt paths all the way to the Dumbarton Bridge, which marked the edge of returning to the known universe to. Of course we didn't know this would work out at the time - on Gmaps it seemed too good to be true - we just hoped for it. The path starts by paralleling Alameda Creek, which winds mostly due West (windy!), past the amazing mid-marsh Coyote Hills, way out into the bay. Way. Out. The path simply T-bones into the Bay and takes a hook South. Now we were riding Southward along the edge of the Bay, but with the dry land part of the East Bay 3 miles to the East of us. A better name for this route might be Middle of the Bay Way.

Shortly after turning South, you'll run into an anxiety-producing, oh-no-are-we-gonna-have-to-turn-around, bullshit "path closed" sign. Ignore this. Walk your bike if you want to avoid the ego-bruising I gave myself by trying to ride around it. After this final challenge, there is just miles and miles of horizon-to-horizon blue sky, blue water bisected by our narrow levee, old salt ponds, egrets, hares, geese, and pelicans. This was my dream - I was riding towards or on the segment that inspired this route - it gave me legs that I didn't really have, hammering towards the ever-looming Dumbarton Bridge. And I hearby name this the Levee to Nowhere.

Once we got to the bridge, we had another little photo shoot. From there, we just rode under the foot of the bridge, got on the south side separated bike path, and rode over the bridge to meet up with the traditional Bay Way route at University Ave. in Menlo Park. The rest of our ride was uneventful. The slightly flagging Donal ate a Cliff Bar, and from there he gave an impressive lead out to Eric and me during the traditional Bay Shore sprint. I took advantage of the aerodynamic-as-a-brick qualities of Eric's cross bike and gapped Eric. With all our route-finding and photo modeling, it was getting towards 10:30. We bid our goodbyes while rolling up to work, but not before debriefing about the ride and agreeing that the trip had been a success and the route a viable one. Enjoy the East Bay Way, our gift to you.

A special mention to Donal for his up-for-anything attitude and uber-positivity, and of course to Eric for his completely calm approach to every obstacle. I might have played it down the potential dram of route finding in a group, but these guys are the perfect (and I mean it) companions for such adventures, especially in tandem (or on a tandem?). They made this trip not only easy but fun.

That's freaking awesome. I can't believe that path way out into the bay worked.

Thanks a lot for this very awesome write up. But not for this post, I would have almost given up my idea to bike to work on BTWD. I just recently got into biking - so still a lot to learn.

I wrote up about my bike ride here :
http://www.krishna2.com/blog/2009/05/eb2b-biking-from-east-bay-to-blekko-on-bike-to-work-day/

Bob & Krishna2, you are both very welcome.